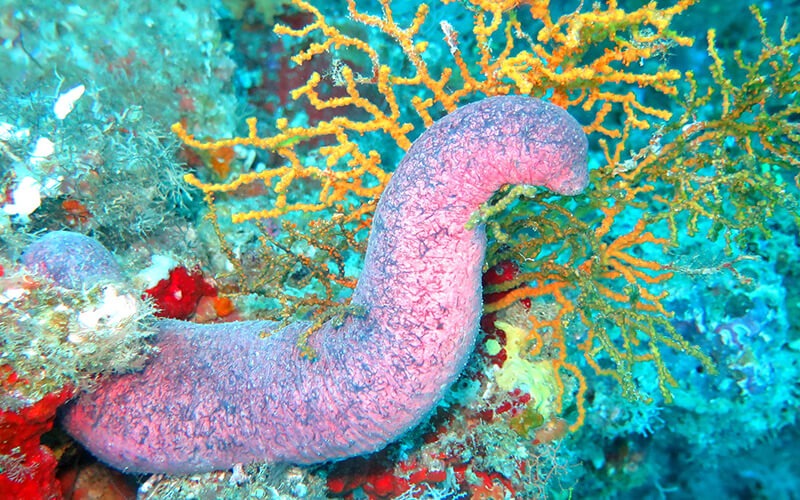 Despite the fact that this curious marine organism has been serving food for the human being for a long time, it seems that lately it has become very fashionable, especially in Asian countries.

Most sea cucumbers are scavenging animals, moving along the seabed and feeding on small particles of microscopic algae or marine animals collected with the tubular legs surrounding your mouth. Particles that wear into smaller pieces are more degraded by bacteria to become part of the ocean’s nutrient cycle. This is a paper similar to that made by earthworms on Earth.

Recently, this marine animal has been paving the way in the distribution and sales channels, both Spanish and international.

What is sea cucumber?

Its name is due to its obvious resemblance to the vegetable. With regard to its appearance, it has an elongated and muscular body and has a soft texture to the touch. The part where the opening of the mouth is surrounded by tentacles.

These animals are considered a delight in East and Southeast Asia, in countries such as China, Hong Kong, Japan, Korea, Taiwan, Malaysia, or Singapore and are used both fresh and dry. In its dry state, sea cucumbers are used as a restorative in traditional Chinese medicine.

It seems that the “Galician fishing sector finds an opportunity in the marketing of sea cucumber“, as explained by the manager of ARVI, José Antonio Suárez Llanos, in an interview for Cope Vigo. It has thus explained that in the Asian countries this Equinodermo is a “delicatessen”, so it is a new opportunity for the fishing sector. Specifically speaking, in Galicia, the exploitation of this species began in the year 2015 and gradually the volume of catches has increased to more than 150,000 kilos.

Holoplus proves this, the study presented last January 16th at the headquarters of the shipowners ‘ Cooperative of the port of Vigo and developed by ARVI in collaboration with Anfaco and the Spanish Institute of Oceanography. This project, which has also counted with the participation of different engineering companies, seeks to go beyond the capture and fishing of this species.

In short, the project “Holoplus” seeks to grow the sector of the sea cucumber of Galicia, developing innovative solutions that respond to the new needs arising after the first contact with the Asian market.

This curious animal is consumed as food in some parts of Asia and used for medicinal purposes in traditional Chinese medicine. Dietary supplements that contain ground and dried sea cucumbers appear to offer a range of health benefits, including arthritis relief.

In addition, the sea cucumber contains several substances that are believed to influence health, including antioxidants, triterpenoids and chondroitin sulfate (a substance found naturally in human cartilage and dietary supplements to treat Arthritis).